100 Greatest Country Songs of All Time ! It reached number # 1 on the US Hot Country Songs charts, for three consecutive weeks. On the Canada Country Tracks charts, it reached # 2. It was the fifth number one in Kenny's career. The Gambler won the Grammy award for best male country vocal performance in 1980.

Heather Myles – Send Me the Pillow That You Dream On

Hank Locklin – Send Me the Pillow That You Dream On 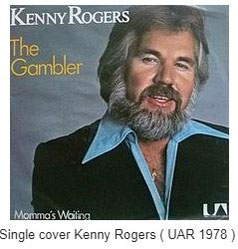 Kenny Rogers – The Gambler, a song written by Don Schlitz, the first recording was by Charlie Tango (Michael Twitty, son of Conway Twitty), recorded in February 1978 for the Starday label, in Gusto Recording Studio, 3557 Dickerson Road, Nashville, TN, and was released on March 8, 1978. That same year was also covered by Don Schlitz (March) and Bobby Bare (April). But obviously the version recorded by Kenny Rogers was the best known and most successful of all.

Kenny Rogers recorded it for the United Artists label on June 16, 1978, at Jack Clement Recording Studio 3102 Belmont Blvd., Nashville, TN, at the recording session, along with The Gambler, were also recorded: sleep tight, goodnight man, and, she belive in me. At the recording session Kenny was accompanied by: Bill Sanford (guitar), Tommy Allsup (guitar), Pete Drake (steel), Bob Moore (bass), Jerry Carrigan (drums), Hargus Robbins (piano) and The Jordanaires. With the production of Larry Butler, the song was released on November 15, 1978. On December 16, 1978, it reached number # 1 on the US Hot Country Songs charts, for three consecutive weeks. On the Canada Country Tracks charts, it reached # 2. It was the fifth number one in Kenny’s career. The Gambler won the Grammy award for best male country vocal performance in 1980.


The Gambler has become one of Rogers’ most enduring successes and an iconic song. As of November 13, 2013, the digital sales of the single amounted to 798,000 copies. In 2018, it was selected for conservation in the National Recording Registry by the Library of Congress as “culturally, historically or artistically significant”

The song was included in Kenny’s sixth studio album, The Gambler (United Artists 1978), the album was released in December 1978, on January 20, 1979, reached # 1 on the charts of US Top Country Albums, for 23 weeks in a row, and a total of 137 weeks remained on the charts. It also reached # 1 on the Canadian RPM Country Albums charts.
The album was certified 5 × Platinum in the USA, 4 x Platinum in Canada and gold in Spain. 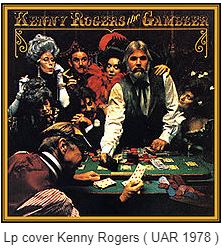 Donald Alan Schlitz Jr., August 29, 1952, Durham, North Carolina, arrived in Nashville being a stranger, Schlitz explains:
The Gambler. ” I wrote it in August of ’76, “he says,” walking home after a meeting with my mentor, Bob McDill (Waylon Jennings songwriter, Anne Murray and others). I walked from his office in Music Row to my apartment, and in those 20 minutes I wrote most of it in my head. I didn’t write a last verse, I had no idea what was going to happen, I thought it was an interesting story but it was discardable. I spent about six weeks trying to figure out what was going to happen after the choir. “

“I finally decided on the eight lines of the last verse,” Schlitz continues, “what I now call my ending of ‘Guy de Maupassant’ (French short story writer) (without real conclusion, since the player is supposed to die but it is not so declared.) And nobody would touch it.

However, the song had its old champions in Music Row, and they believed in Schlitz and his peculiar song too long and without a love story. He made his way into the hands of Butler and Rogers, and when Rogers recorded it, he climbed to number 1 on the country charts and appeared on the worldwide charts. Rogers won a Grammy for Best Male Country Vocal Performance, and Schlitz won a Grammy for Best Country Song. Since then, The Gambler album has sold more than 30 million units worldwide. 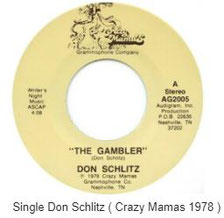 [Verse 1]
On a warm summer’s evenin’ on a train bound for nowhere
I met up with a gambler, we were both too tired to sleep
So we took turns a-starin’ out the window at the darkness
‘Til boredom overtook us and he began to speak

[Verse 2]
He said, “Son, I’ve made a life out of readin’ people’s faces
And knowin’ what their cards were by the way they held their eyes
So if you don’t mind my sayin’, I can see you’re out of aces
For a taste of your whiskey I’ll give you some advice”

[Verse 3]
So I handed him my bottle and he drank down my last swallow
Then he bummed a cigarette and asked me for a light
And the night got deathly quiet and his face lost all expression
Said, “If you’re gonna play the game, boy
You gotta learn to play it right”

[Verse 4]
Every gambler knows that the secret to survivin’
Is knowin’ what to throw away and knowing what to keep
‘Cause every hand’s a winner and every hand’s a loser
And the best that you can hope for is to die in your sleep
[Verse 5]
And when he finished speakin’
He turned back towards the window
Crushed out his cigarette and faded off to sleep
And somewhere in the darkness the gambler, he broke even
But in his final words I found an ace that I could keep 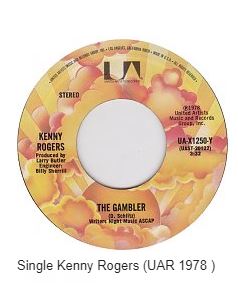 Juice Newton – Angel Of The Morning

David Allan Coe – You Never Even Called Me by My Name

George Jones – A Picture Of Me Without You

Don Williams – I Believe in You

Heather Myles – Send Me the Pillow That You Dream On

Hank Locklin – Send Me the Pillow That You Dream On