George Jones – Say It’s Not You

It reached # 8 on the US Hot Country Songs charts, remaining on the charts for a total of 14 weeks. The song was included on George Jones' thirty-ninth studio album, If My Heart Had Windows (Musicor 1968), George Jones re-recorded it as a duo with Keith Richards of the Rolling Stones in the fall of 1994.

Crystal Gayle – Too Many Lovers

The Judds – Had A Dream Had a Dream (For the Heart)

David Houston – Have a Little Faith 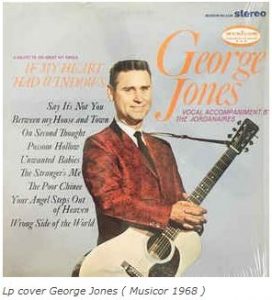 “Say It’s Not You”, a song written by Dallas Frazier, was recorded by George Jones for the Musicor label, on June 13, 1967, at Columbia Recording Studio, 804 16th Ave. South, Nashville, TN. With the production of “Pappy” Daily, the song was released in January 1968, and on April 20 it reached # 8 on the US Hot Country Songs charts, remaining on the charts for a total of 14 weeks. With Musicor, Jones would record at breakneck pace, cutting over 280 singles, and maintained a consistent presence on the country’s charts. “Say It’s Not You” would greatly influence Gram Parsons, who would be a key figure in creating the country-rock genre.

The song was included on George Jones’ thirty-ninth studio album, If My Heart Had Windows (Musicor 1968), the album was released in April 1968, and on August 3, 1968, peaked at # 12 on the charts. from US Top Country Albums, and remained on the charts for a total of 11 weeks.

George Jones re-recorded it as a duo with Keith Richards of the Rolling Stones in the fall of 1994 at Bradley’s Barn, Bender’s Ferry Road, Mount Juliet, TN. The song was included on the album, The Bradley Barn Sessions (MCA 1994). Keith has always been an admirer of George Jones. 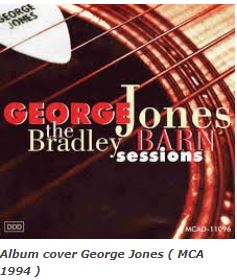 Darlin’, there’s talk around town
‘Bout a girl who spreads love around
Well softly
Darling, say it’s not you!

They say that she comes in alone
They say her self respect is gone
That each night she leave with someone new
Darlin’, say it’s not you!

At first what they said didn’t hurt me
Until they mentioned her name
Then slowly the tears overtook me
‘Cause her name and yours is the same.

Darlin’, say it’s not you!
Shine all your sweet love on me… 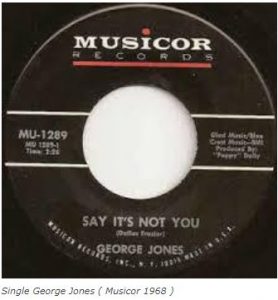 Randy Travis – He Walked On Water

Brooks & Dunn – A Man This Lonely

Conway Twitty and Loretta Lynn – After The Fire Is Gone

Tammy Wynette – The Ways To Love A Man