It reached # 2 on the charts of US Hot Country Songs, and remained 18 weeks on the charts. In the Canadian RPM Country Tracks charts, It reached at number # 3. The song was included in the tenth and final studio album, which they recorded together, Two's a Party (MCA 1981)

Sonny James – You’re The Only World I Know

Freddie Hart – My Hang-Up Is You

Jim Glaser – The Lights of Albuquerque

“I Still Believe in Waltzes”, a song written by Michael Dennis Hughes, Johnny MacRae and Bob Morrison, was first recorded, solo by Conway Twitty for the MCA label, in June 1980 and released in October 1980, was included on the album, Rest Your Love on Me (MCA 1980). 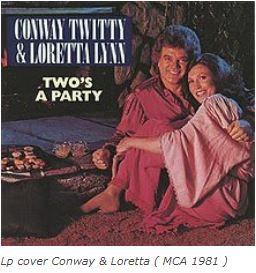 
The song was included in the tenth and final studio album, which they recorded together, Two’s a Party (MCA 1981), the album was released on February 2, 1981, and on April 25, 1981, reached number # 28 in the US Top Country Albums charts, remaining a total of 21 weeks in the charts.

[Loretta:]
I pushed him away and carefully said Im just not htat kinda girl
You might think I’m square
But you’ve been around in the ways of the world
I know that making is taking for granted
Its all easy come ,easy go
He pulled me close ,whispered,now darlin theres something I want you to know

[Loretta:]
He slipped into bed,I turne dover and said
Im worried your working so late
Is it just your job
That keeps you away,Lord
I know the temptations are gray
Im just a wife,Im just a momma
Its not too exciting I know
He pulled me close and whispered those same words that night long ago 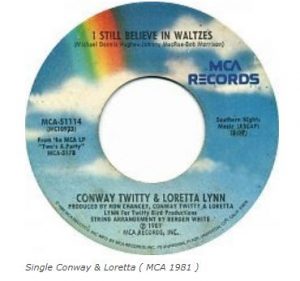 Don Williams – Heartbeat in the Darkness

Diamond Rio – Meet In the Middle

The Statler Brothers – How To Be A Country Star