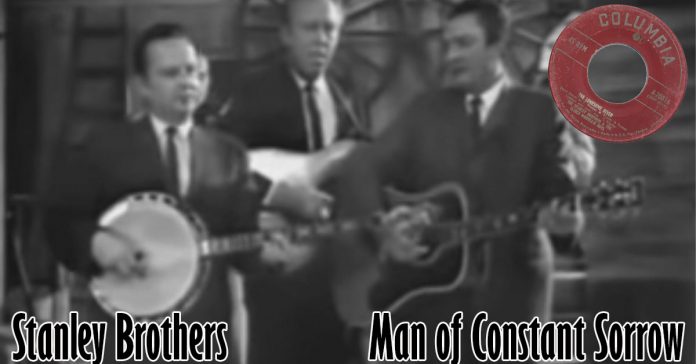 On November 3, 1950, The Stanley Brothers recorded their version of the song with Columbia Records at the Castle Studios in Nashville. The Stanleys learned the song from their father Lee Stanley who had turned the song into a hymn sung a cappella in the Primitive Baptist tradition. The arrangement of the song in the recording however was their own and they performed the song in a faster tempo. This recording, titled “I Am a Man of Constant Sorrow”, was released in May 1951 together with “The Lonesome River” as a single (Columbia 20816). Neither Burnett nor Arthur copyrighted the song, which allowed Carter Stanley to copyright the song as his own work

On September 15, 1959, the Stanley Brothers re-recorded the song on King Records for their album Everybody’s Country Favorite. Ralph Stanley sang the solo all the way through in the 1950 version, but in the 1959 version he was joined by other members of the band in added refrains. The fiddle and mandolin of the early version were also replaced by guitar, and a verse was omitted. This version (King 45-5269) was released together with “How Mountain Girls Can Love” as a single that October 1959.

Patsy Cline – I Fall To Pieces

John Denver – Sunshine On My Shoulders

miguelbilly - December 2, 2020 0
“It's Just a Matter of Time,” a song written by Brook Benton, Belford Hendricks and Clyde Otis, was first recorded by Brook Benton in...

Patty Loveless – You Don’t Even Know Who I Am

Buck Owens – It Takes People Like You (To Make People...

Keith Whitley – I’m No Stranger To The Rain

George Strait – Nobody in His Right Mind Would’ve Left Her