100 Greatest Country Songs of All Time ! It reached # 1 on the U.S. Billboard Hot Country Singles, remained at number one for seven weeks in a row, and held for 27 weeks on the charts. The song is one of Cash's greatest successes, and was certified as a gold record, on January 21, 2010, to surpass the million downloads, (1,200,000). This successful song was the tenth number one of the race of Cash.

Conway Twitty – I Want to Know You Before We Make Love 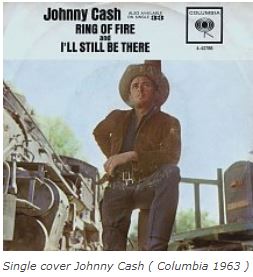 Song written by June Carter & Merle Kilgore, was recorded by Johnny Cash, for the Columbia label, on March 25, 1963, at Columbia Recording Studio, 804 16th Ave. South, Nashville, TN, Johnny, was accompanied on the recording by, Jack Clement (guitar), Luther Perkins (electric guitar), Marshall Grant (bass), WS Holland (drums), Bill Pursell (piano), Karl Garvin (trumpet), Bill McElhiney (trumpet), and The Carter Family (back vocal). With the production of Don Law & Frank Jones, it was released on April 16, 1963. On July 27, 1963, it reached # 1 on the U.S. Billboard Hot Country Singles, remained at number one for seven weeks in a row, and held for 27 weeks on the charts. The song is one of Cash’s greatest successes, and was certified as a gold record, on January 21, 2010, to surpass the million downloads, (1,200,000). This successful song was the tenth number one of the race of Cash.

The song was included on the album, Ring of Fire: The Best of Johnny Cash (Columbia 1963), album composed of tracks from singles and an EP released between 1959 and 1963, Cash’s first years on the label, and marked the first release of these tracks in LP format. The album was released on August 6, 1963. The album reached # 1 on the lists of US Top Country Albums, and was certified gold record in the USA. 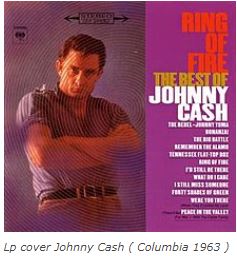 The first recording of the song, was recorded by Anita Carter, with the title of Love’s Ring of Fire, was recorded on October 24, 1962, at Columbia Recording Studio, 804 16th Ave. South, Nashville, TN, for the mercury stamp , was launched in January 1963.

Ring of Fire “, the term refers to falling in love, which is what June Carter was experimenting with Johnny Cash at that time. Some sources claim that Carter had seen the phrase” Love is like a burning “ring of fire”, underlined in one of the books of Elizabethan poetry by his uncle AP Carter. He worked with Kilgore on writing a song inspired by this phrase as he had seen his uncle do in the past. She had written: “There is no way to be in that kind of hell, there is no way to extinguish a flame that burns, burns, burns”.


They have made more than 200 versions of the song, continuation cite some. 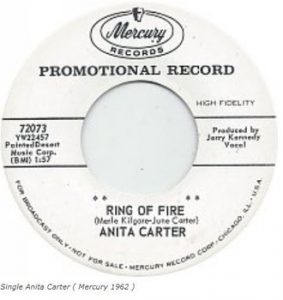 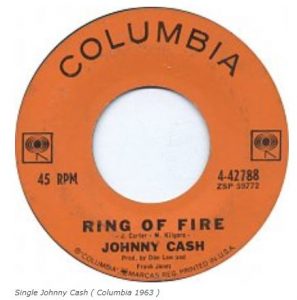 George Jones – If My Heart Had Windows

Carl and Pearl Butler – Don’t Let Me Cross Over

The Statler Brothers – How To Be A Country Star

George Jones – I’m Not Ready Yet