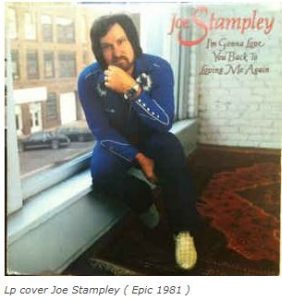 “Whiskey Chasin ‘”, Song written by Buddy Cannon, was recorded by Joe Stampley for the Epic label, in November 1980, the album was recorded between three studios: Sound Emporium, Nashville, TN, Woodland Sound Studio, Nashville, TN and Columbia Recording Studio, Nashville, TN. In the recording session of the album, Joe was accompanied by: Davi Briggs, Terry McMillan, Leo Jackson, Mike Leech, Reggie Young, Billy Sanford, Weldon Myrick, Larrie Londin, Jimmy Capps, Pete Wade and The Shelly Kurland Strings. With the production of Ry Baker, the song was released in May 1981. In the U.S Hot Country Songs charts, It reached at number # 18, and in the Canadian RPM Country tracks charts, It reached at number # 22.


The song was included in Joe’s fifteenth studio album, I’m Gonna Love You Back to Loving Me Again (Epic 1981), the album reached # 33 on the charts of the US Top Country Albums. 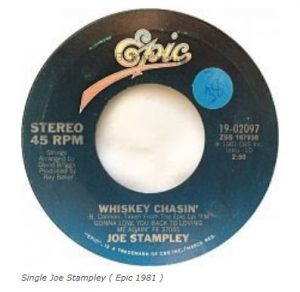 Wynn Stewart – Another Day, Another Dollar

miguelbilly - April 20, 2021 0
“I Need More of You”, song written by David Bellamy, was recorded by The Bellamy Brothers for the MCA / Curb label, in February...

Dolly Parton – It’s All Wrong, But It’s All Right

Ricky Van Shelton – From A Jack To A King