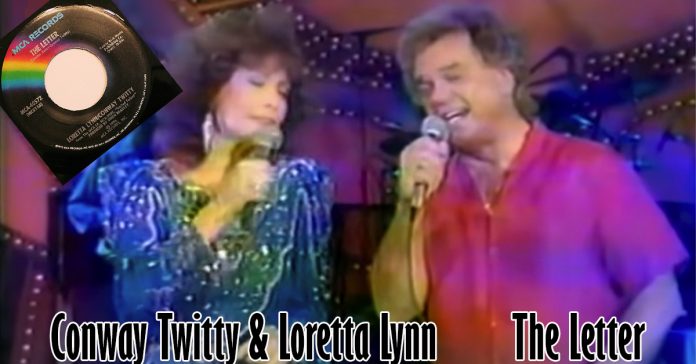 “The Letter” is a song recorded by American country music artists Conway Twitty and Loretta Lynn as a duet. It was released in June 1976 as the first single from their album United Talent. The song peaked at number 3 on the Billboard Hot Country Singles chart. It also reached number 1 on the RPM Country Tracks chart in Canada.
It was written by Twitty and Charles Haney.

The song – spoken wall-to-wall, with Twitty and Lynn trading spoken parts and set to a ballad-type musical background – is about a young man who is unfaithful to his girlfriend, resulting in the end of the relationship. Some time later, the two meet up again and she asks him to make good on a promise they made that if one ever needed to help the other, he or she would. She asks him to write a letter that affirms love and faithfulness, regret and willingness to repent under the guise that it would be seen by her current boyfriend (who, like the male protagonist was unfaithful) and that he would realize his mistake and that he had a good thing. The letter turns out to be ironic: It is a type of a Dear John letter, and it is the letter writer who, in writing the letter, admits his own mistakes and expresses his willingness to change.

Today I saw her for the first time since she left me
And she said, I’ve got a favor to ask of you
And I said all right what is it?

And she said, you know you always told me
If I ever needed any help just to ask you and you’d help me
And I said yeah, I remember, and she said

Well, there’s this fellow that I’ve been going with
And I just found out that he’s been slipping around me
And I thought that maybe if you’d write me a letter
And tell me that you miss me and that you still love me.
That he may find it and it might read it.
And it might make him jealous and I might not lose it

And I said, OK I’ll write you the letter
Dear sweetheart just a line to let you know
That I still think about you and I still love you so
I remember your kisses and every time you held me tight
But most of all I remember the good times that we had each night
Dear sweetheart if you’re lonely just let me know
For you’re still my one and only and I still love you so
I’m gonna close for now sweetheart and try to go on without you
But don’t forget I’ll always love you no matter what you do.

So now I’ve written the letter the way you’ve asked me to
And I hope it makes him jealous the way you want it to
For I’ve told you I still love you and I wanna be with you
But you know sweetheart the saddest part,
I’m not pretending for I still do…

Conway Twitty – We Had It All

Rick Treviño – Running Out Of Reasons To Run

Dolly Parton – Coat Of Many Colors

Buck Owens – Above And Beyond