"I Will Always Love You" On June 8, 1974, it reached number one on the country charts. Dolly would record another version in 1982 on the MCA label, for the soundtrack of the film, The Best Little Whorehouse in Texas, was another success, returning to reach number one on country charts, on October 16, 1982.

Don Williams – Another Place, Another Time 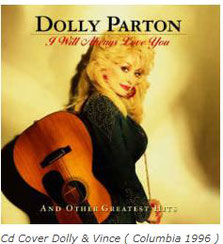 Song written and recorded by Dolly Parton, was recorded on June 13, 1973, and produced by Bob Ferguson, for the RCA label, was released on June 6, 1974, the song was included on the album, Jolene (MCA 1974), On June 8, 1974, it reached number one on the country charts. Dolly would record another version in 1982 on the MCA label, for the soundtrack of the film, The Best Little Whorehouse in Texas, was another success, returning to reach number one on country charts, on October 16, 1982. In 1995, Parton recorded a third version of this song with Vince Gill as a duo, recorded for the album, I Will Always Love You (And Other Greatest Hits) for the label (Columbia 1996). This version became one of the 20 best hits in the country and won the 1995 Country Music Association Award and received a Grammy nomination.

This is not a love song in the conventional sense; Parton wrote it for a close friend. In 1967, she was invited by country star Porter Wagoner to co-host her television show, where they became famous for their duets. However, over time, his enormous talent eclipsed that of his mentor and moved to greener pastures. She wrote the song for him to show his appreciation for the time they had worked together.

Leaving Wagoner was not easy: she thought Parton was making a mistake and felt that she was disloyal. Parton played the song to Wagoner the morning after she wrote it as a way to let him know that his mind was determined and to express what he felt for him. Apparently, the message came: Parton said that Wagoner was crying when he finished, and he called it “the prettiest song I’ve ever heard”. 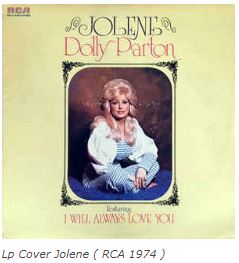 All this was reduced in 1973, and the following year, Parton and Wagoner formally announced their separation after a seven-year partnership. Parton said: “I wrote that song to say, ‘That’s how I feel, I’ll always love you, but I have to go.’”

Parton performed this song for Porter Wagoner on May 19, 2007, during his 50th anniversary celebration of Porter at the Grand Ole Opry. “This was my farewell song to Porter,” said Parton before singing to him. Wagoner suffered from lung cancer at that time and died on October 28, 2007.

Elvis liked this song a lot, and wanted to cover it. Parton was interested, but Presley’s managers insisted that he be given a share of the publishing rights if he recorded it, a common demand at that time. Parton remained firm, which was a very difficult decision, but which worked very well for her, since the publishing rights she would have waived turned out to be substantial. Dolly said: I cried all night. I would have killed to hear him sing it. But finally, when Whitney recorded it, I was glad I resisted it. 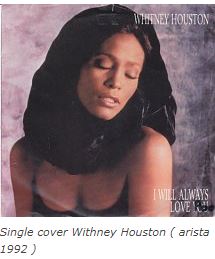 When this song was chosen for the 1992 film The Bodyguard, it turned out to be a great benefit for both Parton and Whitney Houston. His version became a worldwide hit in pop music, earning huge royalties for both artists. The national ballad of Parton was now familiar to the audience of pop, soul and contemporary adults, and not only in the United States: Houston took it to number 1 in a variety of territories, including the United Kingdom, Canada, Australia, France, Germany, Japan and the Netherlands. Selling more than 12 million copies.

The version was recorded for, The Bodyguard (Original Soundtrack Album) on the label (Arista 1992). It was released on single on November 3, 1992.

Dolly Parton – I Will Always Love You lyrics 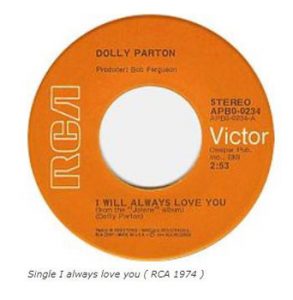 The Judds – Have Mercy

Eddy Arnold – Turn The World Around

Loretta Lynn – Here I Am Again

George Jones – I’m Not Ready Yet

Sonny James – Since I Met You Baby