It reached # 1 on the charts of US Hot Country Songs, for two weeks in a row, and remaining a total of 13 weeks on the charts. On the Canadian RPM Country Tracks charts, it reached # 5. The song was included in Alabama's fifth studio album, Feels So Right (RCA 1981)

Everly Brothers – All I Have To Do Is Dream

Warner Mack – The Bridge Washed Out 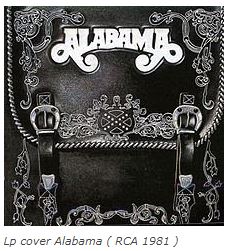 “Feels So Right” , a song written by Randy Owen, was recorded by the country – rock band, Alabama for the RCA label, on August 26, 1980, at The Music Mill, 1710 Roy Acuff Place, Nashville, TN, with the production of Harold Shedd, Larry McBride and Alabama, the song was released on May 1, 1981. On July 18, 1981, It reached # 1 on the charts of US Hot Country Songs, for two weeks in a row, and remaining a total of 13 weeks on the charts. On the Canadian RPM Country Tracks charts, it reached # 5. It was the fourth number one in the Alabama band’s career.

The song was included in Alabama’s fifth studio album, Feels So Right (RCA 1981), the album was released in February 1981, and on May 23, 1981, reached # 1 on the US Top Country charts. Albums, for 28 consecutive weeks, and remaining a total of 174 weeks in the charts. The album was certified quadruple platinum in the USA, and platinum in Canada.

A mellow love song with sensuous and somewhat explicit lyrics and a strong country pop styling, “Feels So Right” was also Alabama’s first crossover hit, performing modestly well on CHR and Top 40 radio stations. The song peaked at No. 20 on the Billboard Hot 100 in the summer of 1981, and became their first of five top 10 hits on the adult contemporary chart. On the country chart, the song has the distinction of becoming the first No. 1 song to drop directly out of the top 40 since the inception of the 100-position chart, falling to No. 43 for the chart week of August 1, 1981.

The pop “love ballad” style evident on “Feels So Right” , along with the country rock style of its other songs, became the cornerstone of Alabama’s sound throughout the 1980s and 1990s. Today, it remains one of Alabama’s most popular songs.

Whisper to me softly, breathe words upon my skin
No one’s near and listening, so please don’t say goodbye
Just hold me close and love me, press your lips to mine
Mmm feels so right. Feels so right.

Lying here beside you I hear the echoes of your sighs
Promise me you’ll stay with me and keep me warm tonight
So hold me close and love me, give my heart a smile
Mmm feels so right. Feels so right.

Your body feels so gentle and my passion rises high
You’re loving me so easy, you’re wish is my command
Just hold me close and love me, tell me it won’t end
Mmm feels so right. Feels so right.

Ah, you feel so right baby…. 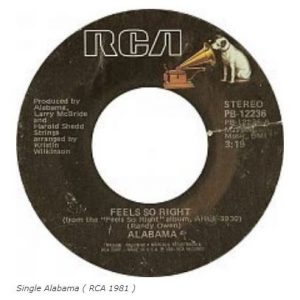 The Kendalls – Thank God for The Radio

Steve Wariner – All Roads Lead To You

Tammy Wynette – ‘Til I Get It Right