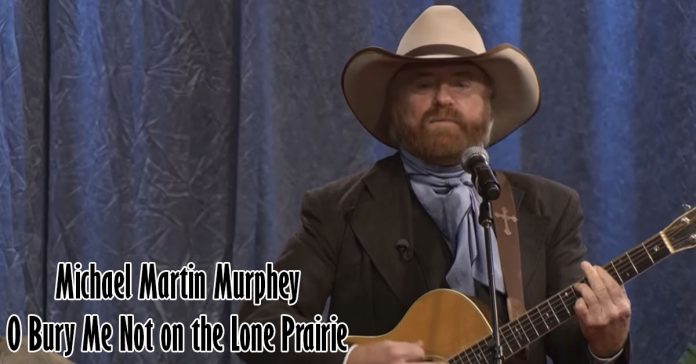 “Bury Me Not on the Lone Prairie” is a cowboy folk song. Also known as “The Cowboy’s Lament”, “The Dying Cowboy”, “Bury Me Out on the Lone Prairie”, and “Oh, Bury Me Not”, the song is described as the most famous cowboy ballad. Members of the Western Writers of America chose it as one of the Top 100 Western songs of all time. Based on a sailor’s song, the song has been recorded by many artists, including Moe Bandy, Johnny Cash, Cisco Houston, Burl Ives, Bruce Molsky, The Residents, Tex Ritter, Roy Rogers, Colter Wall and William Elliott Whitmore.

The ballad is an adaptation of a sea song called “The Sailor’s Grave” or “The Ocean Burial”, which began “O bury me not in the deep, deep sea.” The Ocean Burial was written by Edwin Hubbell Chapin, published in 1839, and put to music by George N. Allen.

“Oh, bury me not on the lone prairie,”
These words came low and mournfully
From the pallid lips of a youth who lay
On his dying bed at the close of day

“It matters not, so I’ve been told
Where the body lies when the heart grows cold;
But grant, oh, grant this wish to me:
Bury me not on the lone prairie

“Oh, bury me not–” And his voice failed there
But we took no heed of his dying prayer;
In a narrow grave just six by three
We buried him there on the lone prairie

miguelbilly - January 4, 2021 0
Made in Japan, song written by Bob Morris & Faye Morrisy, was recorded by Buck Owens And The Buckaroos for the Capitol label, was...

miguelbilly - March 11, 2021 0
Bartender's Blues, a song written and recorded for the first time by James Taylor for the Columbia label, was recorded between March 15 and...