Reached number # 3 of the US Hot Country Songs charts, and remained on the charts for a total of 15 weeks, on the Canadian RPM Country Tracks charts it managed to reach # 1, for two consecutive weeks. The song was included in Johnny's forty-fourth studio album, Any Old Wind That Blows (Columbia 1973)

Travis Tritt – Can I Trust You With My Heart 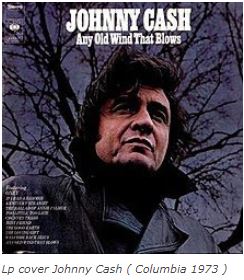 “Any Old Wind That Blows”, a song written by Dick Feller, was recorded by Johnny Cash for the Columbia label, was recorded on October 12, 1972, in House Of Cash, Hendersonville, TN, in the same session the song was also recorded, “Kentucky Straight”, in the recording session Johnny was accompanied by: Carl Perkins (guitar), Ray Edenton (guitar), Red Lane (guitar), Bob Wooton (guitar), Marshall Grant (bass), WS Holland and Kenneth Malone (drums), Charles Cochran (piano) and Larry Butler (keyboards). With the production of Larry Butler, the song was released on November 9, 1972, on March 10, 1973, reached number # 3 of the US Hot Country Songs charts, and remained on the charts for a total of 15 weeks, on the Canadian RPM Country Tracks charts, it managed to reach # 1 on March 3, 1973, for two consecutive weeks.

The song was included in Johnny’s forty-fourth studio album, Any Old Wind That Blows (Columbia 1973), the album was released in January 1973, March 24, 1973, reached # 5 of the charts US Top Country Albums, and remained a total of 14 weeks on the charts.

Lord, she’s restless
Like cotton candy clouds that sail the day
Slow an’ free
And she possesses
A mind that can’t resign itself to stay
For long with me
Tho’ I’ve tried and tried to keep her tied and satisfied
Until she really needs me
Yes I do
But when that certain look comes on her face
I can’t replace it, and she leaves me

I know she needs me
About as much as I need someone else
Which I don’t
And if need be
I swear someday I’ll up and leave myself
Which I won’t
Even if she loved another man, I’d understand it more than I do
Mmm, mmm, mmm
But I know the only reason
That she ever had for leavin’, is she wants to

Charley Pride – I’d Rather Love You

Steve Wariner – All Roads Lead To You

Merle Haggard – I Threw Away The Rose