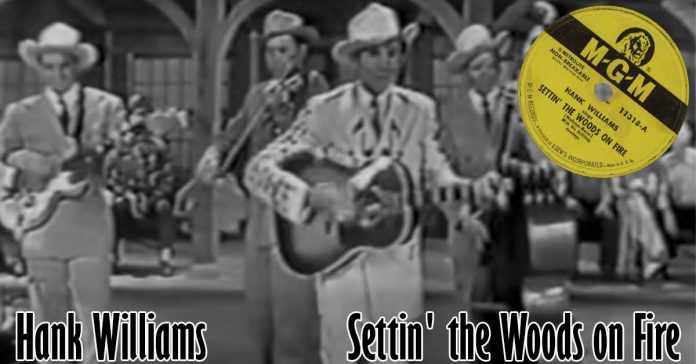 “Settin’ the Woods on Fire” is the name of a single and the A-side song by Hank Williams released in 1952. The song reached #2 on U.S. Billboard Most Played by Jockeys chart and #2 on the National Best Sellers chart.

Although it sounds remarkably like a Hank Williams composition, “Settin’ the Woods on Fire” was written by Hank’s song publisher and producer Fred Rose and an elderly New Yorker, Ed G. Nelson. Williams recorded it with Rose producing at Castle Studio on June 13, 1952 in Nashville with Jerry Rivers (fiddle), Don Helms (steel guitar), and Harold Bradley (rhythm guitar), while it is speculated that Chet Atkins played lead guitar and Ernie Newton played bass. The song peaked at #2 while the B-side, “You Win Again,” climbed to #10. Author Colin Escott offers that the song “pointed unerringly toward rockabilly,” In 2007, an episode of The Batman was released called Two of a Kind, Joker and Harley Quinn sing the song while causing chaos in Gotham City.

Buck Owens – Where Does The Good Times Go

Conway Twitty – She Needs Someone to Hold Her (When She...

Ronnie Milsap ‎– Where Do The Nights Go

Dwight Yoakam – Ain’t That Lonely Yet

miguelbilly - January 5, 2021 0
“Ain't That Lonely Yet”, a song written by Kostas and James House, was recorded by Dwight Yoakam for the Reprise label, was recorded in...

Buck Owens – It Takes People Like You (To Make People...

Ray Price – Curtain In The Window