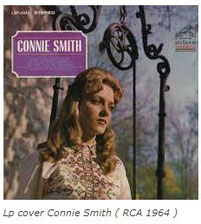 The song was included in Connie Smith’s debut album, Connie Smith (RCA 1965), also reaching # 1 on the U.S. Top Country Albums. The album was recorded at the RCA Studio B in Nashville, Tennessee, between July 16, 1964, and November 18, 1964, in the session was accompanied by the “Team A” of musicians from Nashville, which included members of the Bill Anderson’s band, The Po ‘Boys.The album was released in March 1965. 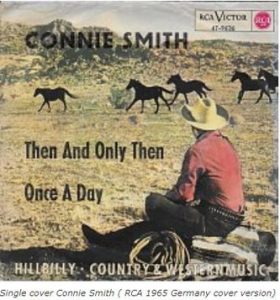 Smith was in his twenties in August of ’63 when he took part in a talent show at the Frontier Ranch Country Music Park near Columbus, Ohio. Bill Anderson, acting in the area, was asked by the organizers of the contest. If he could help them judge the contenders for the contest, Bill was delighted. Connie took the stage in a homemade cowgirl outfit with a guitar that was almost as big as her. She sang in Jean Shepard’s 1955 Top Ten “I Thought Of You”.

Bill listened attentively, and was surprised by the strength of his voice. Connie, won the contest.

Anderson approached Connie, offered her congratulations for winning the contest, visited her for a while and then suggested that she come to Nashville and shoot the music business. Smith was so overwhelmed that she passed on the invitation as a simple polite talk, but Connie did not realize that Anderson was serious.


Five months later, in January 1964, Connie went to see Bill at one of his shows in Canton, Ohio. He told Anderson that he had been thinking seriously about the musical idea. Anderson recorded some demos of Connie, first he took them to Owen Bradley from Decca, but he had already filled the record, and he had just signed with Loretta Lynn, but Bill kept trying, finally he went to see Chet Atkins, director of RCA Victor, he listened to the demos, and he liked them, but he told him that he already had three singers for RCA, “Skeeter Davis, Dottie West and Norma Jean, and he did not have so much material to record Anderson took the step and said to Chet, “If you sign Connie, I promise you I’ll write more than enough songs for her.”
So it was. Connie signed a long-term contract with RCA Victor on June 24, 1964. Because Atkins was too busy with other artists, he assigned producer Bob Ferguson to direct Connie’s sessions, which he did for many years until Connie He retired from RCA in November. , 1972. Bill worked day and night to write songs for Connie, of the 12 songs that are part of Connie’s debut album, Bill wrote 6 and among them the great success, Once a day. 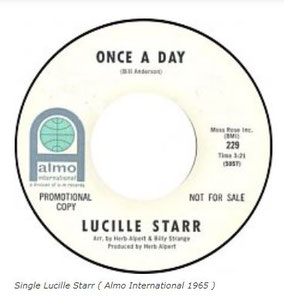 Connie Smith – Once A Day lyrics

[Tag]
Once a day, every day, all day long 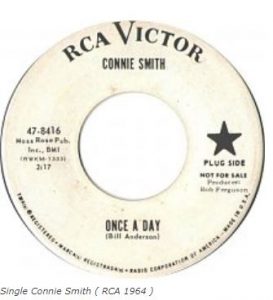 miguelbilly - December 24, 2020 0
Song written by Don Reid and Harold Reid, was recorded by country music group The Statler Brothers for the mercury label, was recorded on...

Merle Haggard – Sing Me Back Home

miguelbilly - May 2, 2021 0
"I've Already Loved You in My Mind" is a song that is written and recorded by American country music artist Conway Twitty. It was...

Dan Seals – You still move me