Alabama – (There’s A) Fire In The Night

LeAnn Rimes – One Way Ticket (Because I Can)

Carter Family – Can the Circle Be Unbroken (By and By)

Conway Twitty – Linda On My Mind

Rick Treviño – Running Out Of Reasons To Run 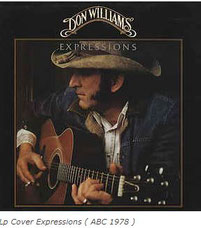 Song written by Danny Flowers and recorded by Don Williams, produced by Don Williams & Garth Fundis, was released in October 1978, as the first single of the eighth album of Don, Expressions (ABC Records 1978), the song reached number one on country charts USA, on January 6, 1979, was the eighth number one in the career of Don, also reached number one in singles lists in Canada, and the album got the number two position in the USA and the number one in Canadian charts. Don Williams, nicknamed the gentle giant for his imposing physical stature, stormed the top of charts again and again (17 numbers ones between 1974 and 1986).

This song by Don Williams definitely had a different sound, it was perhaps Williams’ most rock performance and one of his best songs.

It was also recorded by Eric Clapton for his 1978 Backless album and a live version of Clapton’s album Just One Night became Billboard’s 30th hit number in 1980. 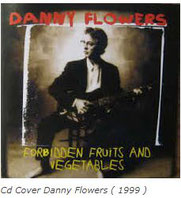 Don Williams – Tulsa Time Lyrics
I left Oklahoma, drivin’ in a Pontiac
Just about to lose my mind
I was goin’ to Arizona
Maybe on to California
Where the people all live so fine.

My baby said, I’z crazy
My mama called me lazy
I was gonna show ’em all this time
‘Cause you know I ain’t no fool
And I don’t need no more schoolin’
I was born to just walk the line.

Well, there I was in Hollywood
Wishin’ I was doin’ good
Talkin’ on the telephone line
But they don’t need me in the movies
And nobody sings my songs
Guess, I’m just a wastin’ time.

Well, then I got to thinkin’
Man I’m really sinkin’
An I really had a flash this time
I had no business leavin’
An nobody would be grievin’
If I just went on back to Tulsa time. 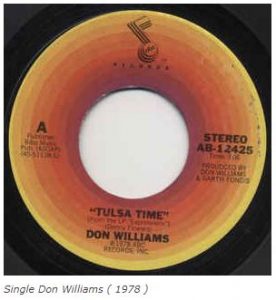 miguelbilly - March 28, 2022
0
Previous articleMoe Bandy – I Cheated Me Right Out Of You
Next articleRonnie Milsap – (There’s) No Gettin’ Over Me

Loretta Lynn – They don’t make ’em like my Daddy Anymore