The song reached # 1 on the charts of US Hot Country Songs, and remained 17 weeks on the charts. On the Canadian RPM Country Tracks charts, he reached # 13. The song was the first number one for Shelly and the second for David. “You're the Reason God Made Oklahoma,” was the most successful of seven country hits by the duo. 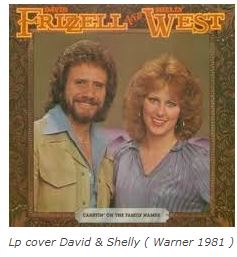 You’re the Reason God Made Oklahoma, a song written by Felice and Boudleaux Bryant, Larry Collins and Sandy Pinkard, was recorded by David Frizzell & Shelly West for the Warner label, was recorded in June 1980 in Hollywood, CA. With the production of Snuff Garrett, the song was released in January 1981, on April 11, 1981, reached # 1 on the charts of US Hot Country Songs, and remained 17 weeks on the charts. On the Canadian RPM Country Tracks charts, he reached # 13. The song was the first number one for Shelly and the second for David. “You’re the Reason God Made Oklahoma,” was the most successful of seven country hits by the duo.

Also, it was included in David & Shelly’s album dedut, Carryin ‘on the Family Names (Warner / Viva 1981), on August 28, 1981, reached number 6 on the charts of US Top Country Albums, the album remained in the charts a total of 68 weeks.

Story behind the song:

In 1978, Shelly met Allen Frizzell, brother and component of David’s band, Allen was who introduced her brother to Shelly, in 1978, Shelly joined David’s band in California, and worked for two years in nightclubs from the area. Jack Brumley, brother of Tom Brumley (a former member of the Buck Owens band, the Buckaroos) signed them to a management contract, and then approached record producer Snuff Garrett, who loved the concept of the entire family. He asked Larry Collins and Sandy Pinkard to write a special song for David and Shelly to cut the duo. They returned with “You are the reason God made Oklahoma.” 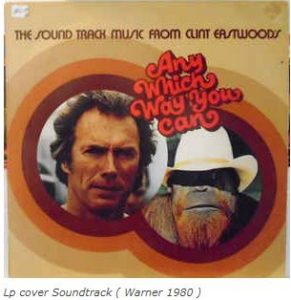 Snuff had a distribution agreement with Casablanca West, but unfortunately, just after all the work, that company broke up. So David and Shelly got stuck with an album finished with no way to market it. After exhausting all the possibilities in Los Angeles, producer Garrett headed east to Nashville to buy there, but was rejected by all the major labels. De returned to the West Coast, where he and Steve Dorff were assigned to work on the soundtrack of a new Clint Eastwood movie called “Any Which Way You Can” (tracking the 1979 blockbuster “Every Which” Road but loose ). When preparing for the project, Garrett performed” You’re The Reason God Made Oklahoma “for Eastwood, who claimed” That’s a gun. “In Clint’s direction, the song was included in the film, arriving by The radio of a truck.

David Frizzell, told Shelly that the song would be a great success. Frizzell’s prediction came true. Garrett revived his old Viva Records and released the soundtrack album in the late 1980s, even before the movie premiere on December 12. Four singles were released before “You’re the reason God made Oklahoma”, but, starting with KGEN in Tulare, California, radio stations across the country began playing it outside the soundtrack. Viva published it as a single, Warner Brothers picked up the teacher and the song that nobody wanted was shot at number 1 on April 11, 1981.

David Frizzell & Shelly West You’re The Reason God Made Oklahoma Lyrics
There’s a full moon over Tulsa,
I hope that it’s shining on you.
The nights are getting cold,
In Cherokee County.

There’s a Blue Norther passing through.
I remember green eyes and a ranchers daughter.
But remember is all that I do.
Losing you left a pretty good cowboy,

Sometimes when the wind blows you can
See the mountains,
And all the way to Malibu.
Everyone’s a star here in L.A. County,

You ought to see the things that they do
All the cowboys down on the Sunset Strip
Wish that they could be like you.
The Santa Monica Freeway,

I work 10 hours on a John Deere tractor,
Just thinking of you all day.
I’ve got a calico cat and a 2 room flat,
On a street in West L.A. 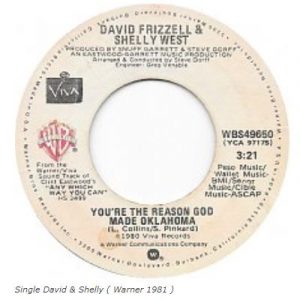 The Judds – Grandpa (Tell Me ‘Bout The Good Old Days)

miguelbilly - February 24, 2021
0
Previous articleTammy Wynette And George Jones – Near You
Next articleWaylon & Willie – Mamas Don’t Let Your Babies Grow Up To Be Cowboys

Ronnie Milsap – Let’s Take The Long Way Around The World

George Jones – Say It’s Not You