Cal Smith – She Talked A Lot About Texas

Peaked at # 13 on the US Hot Country Songs charts, remaining on the charts for a total of 13 weeks. On the Canadian RPM Countrt tracks charts, it peaked at # 5. The song was included on Cal Smith's eleventh studio album, It's Time to Pay the Fiddler (MCA 1975)

Skeets McDonald – Don’t Let the Stars Get in Your Eyes

Don Williams – Listen to the Radio 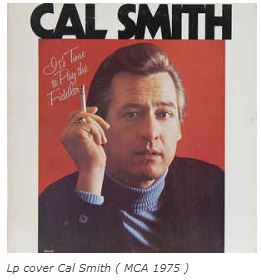 Cal Smith – She Talked A Lot About Texas Lyrics 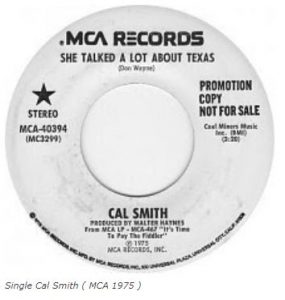 Randy Travis – Is it still over

The Bellamy Brothers – For All the Wrong Reasons

Kenny Rogers & Dottie West – Anyone Who Isn’t Me Tonight

miguelbilly - January 31, 2021
1
Previous articleRonnie Milsap ‎– Where Do The Nights Go
Next articleCharley Pride ‎- Someone Loves You Honey

Johnny Duncan – She Can Put Her Shoes Under My Bed ( Anytime )

Exile – Woke Up in Love

Buck Owens – Open Up Your Heart