Peaking at # 1 on the U.S Hot Country Songs charts, remaining a total of 18 weeks on the charts. It also peaked at # 1 on the Canadian RPM Country Tracks charts. The song was included on Charley's 27th studio album, Everybody's Choice (RCA 1982)

The Statler Brothers – Do You Remember These

Don Williams – It Must Be Love

Jim Glaser – The Lights of Albuquerque

“Mountain of Love”, song was written and recorded for the first time by Harold Dorman for the Rita label, it was recorded in the fall of 1959, at the Royal Recording Studios in Memphis, TN. The song was released in December 1959. 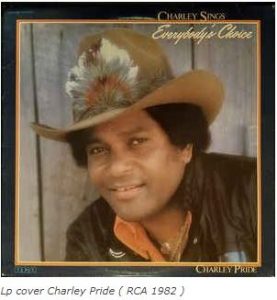 Charley Pride recorded the version of the song for the RCA label on November 3, 1981, at Music City Music Hall, 800 17th Ave. South, Nashville, TN. At the same recording session, it was also recorded, “Love is a shadow “. Charley was joined at the recording session by: Pete Wade (guitar), Bobby Thompson (guitar), Chip Young (guitar), Mike Leech (bass), Jerry Carrigan (drums), David Briggs and Shane Keister (piano) and Cherry Sisters (Background vocals). With the production by Norro Wilson, the song was released in December 1981, on March 20, 1982, peaking at # 1 on the U.S Hot Country Songs charts, remaining a total of 18 weeks on the charts. A week later, on March 27, 1982, it also peaked at # 1 on the Canadian RPM Country Tracks charts. It was the 26th number one in Charley’s career.

Charlie Pride – Mountain of Love Lyrics
Mountain Of Love
Standing on a mountain looking down on a city
The way I feel is a dog-gone pity
Teardrops are fallin’ down the mountainside
Many times I’ve been here and many times I cried
We used to be so happy, when we were in love
High on a mountain of love

Night after night I been standing here alone
Weeping my heart out till cold gray dawn
Prayin’ that you’re lonely and you come here too
Hopin’ just by chance that I’ll get a glimpse of you
Tryin’ hard to find you, somewhere I love
High on a mountain of love
Mountain of Love, a Mountain of Love
You should be ashamed

You used to be a mountain of love
But you just changed you name
Way down below there’s a half a million people
Somewhere there’s a church and a big tall steeple
Inside the church there’s an alter filled with flowers
Wedding bells are ringing and it should have been ours
That’s why I so lonely, I dream from above
High on a mountain of love 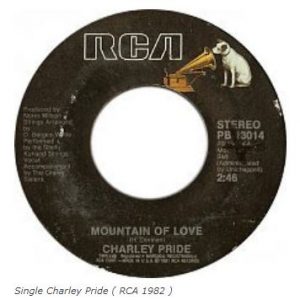 Johnny Rodriguez – Just Get Up and Close the Door

Jim Reeves – He’ll Have To Go

George Strait – Round About Way

George Strait – A Fire I Can’t Put Out