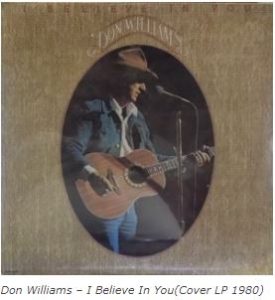 “I Believe in You” is a song written by Roger Cook and Sam Hogin, and recorded by American country music artist Don Williams. It was released in August 1980 as the first single and title track from the album I Believe in You.

The song was also a hit in Europe and Australia. It was best received in New Zealand, where it reached number four on the pop singles chart and is ranked as the 38th biggest hit of 1981. 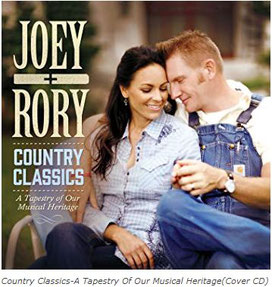 [Verse 2]
Well I don’t believe that heaven waits
For only those who congregate
I like to think of God as love
He’s down below, he’s up above
He’s watchin’ people, everywhere
He knows who does and doesn’t care
And I’m an ordinary man
Sometimes I wonder who I am
[Chorus 2]
But I believe in love
I believe in music
I believe in magic
And I believe in you 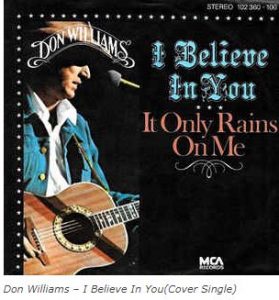 George Strait – I Cross My Heart

miguelbilly - April 20, 2021 0
"I Cross My Heart" is a song written by Steve Dorff and Eric Kaz, and performed by American country music artist George Strait. It...

Charley Pride – When I Stop Leaving (I’ll Be Gone)

miguelbilly - June 18, 2020 0
"He Stopped Loving Her Today" is a song recorded by American country music artist George Jones. It has been named in several surveys as...

Waylon Jennings – Luckenbach, Texas (Back to the Basics of Love)